Additional firefighting resources are coming to Warm Springs to assist with the Lionshead and P-515 fires burning on Confederated Tribes of Warm Springs Tribal Lands.   In today’s morning fire report, Northwest Incident Management, Type 2, Team 10 thanked the Confederated Tribes of Warm Springs and The Bureau of Indian Affairs for their support and professional partnership while managing the two fires. Due to increased fire complexity, a Type 1 team, Pacific Northwest Incident Management Team 3 under the leadership of Noel Livingston, will assume responsibility for the fire on Tuesday, September 8th.

The Lionshead Fire grew significantly this weekend and is now mapped at 18,615 acres.  Firefighting efforts have been split into two branches.  Branch 1 is north of the Whitewater River with 3 divisions and Branch 2 is south of Whitewater with 4 divisions.

On Sunday, a smoke inversion kept large fire growth to a minimum on the Lionshead Fire. The fire is  31% contained. Firefighters took advantage of the relatively quiet fire behavior to locate and cool spot fires and scout for possible places to stop the fire’s spread. Vegetation was removed along the J-100 and P-400 roads to prepare them for use as control lines on the north and south sides of the fire. Potential control lines were also identified west of the J-100 Road to try and stop the fire’s spread to the southwest.

Mop-up operations and removal of excess equipment continued on the P-515 Fire. Surplus resources are being reassigned to the Lionshead Fire.

Fire resources, today, will continue to work along the J-100 and P-400 roads on potential containment lines. Interagency Hotshot crews will diligently work to establish lines between fingers of the Lionshead Fire and burn out fuels to reduce the chance of further spread to the southeast.

There is a Red Flag Warning in effect today for strong winds and low humidity. A cold front is expected to pass over the fire area this afternoon, bringing winds gusting up to 30 mph from the east to northeast through Tuesday. The winds have the potential to push the fire through unburned areas to the west of the fire and north of Bald Peter. Temperatures will be cooler and relative humidity slightly higher than yesterday.

For public and firefighter safety, roads and trails on the southwest portion of the Warm Springs Reservation near the fires are closed to the public. Forty miles of the Pacific Crest Trail are closed between Santiam Pass and Olallie Lake. Much of the Mt. Jefferson Wilderness and some nearby lands and recreation sites are closed. See Willamette, Deschutes, and Mt. Hood N.F. websites for trail and area closures.  Deschutes NF Alerts     Willamette NF Alerts     Mt. Hood NF Alerts

A Temporary Flight Restriction is in place over the P-515 and Lionshead Fires. Wildfires are a No Drone Zone.

You can read the full morning report HERE 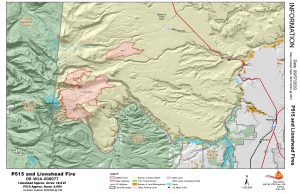 To the north of the Warm Springs Reservation the, 17, 507 acres, White River Fire has not grown in size for several days.  Logs and stumps continue to smolder and unburned islands are likely to burn today inside the fire perimeter.

Crews will patrol the fire perimeter, watching for changes in fire activity triggered by anticipated strong northeast winds, while continuing to reinforce established containment lines and mopup. Resource advisors will work with crews and heavy equipment operators to repair areas damaged by suppression activities and remove unneeded equipment and trash. 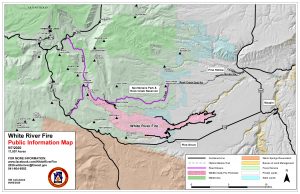