The Portland City Council has voted to mark the second Monday in October as “Indigenous Peoples’ Day.” The resolution unanimously approved Wednesday honors the contributions of Native Americans in the Portland area. It’s no coincidence that it falls on the same date as the federal Columbus Day holiday, which was established in 1937 to commemorate Christopher Columbus’ arrival in the Americas in 1492. Jeremy FiveCrows of the Nez Perce Tribe told city commissioners that the European arrival was pivotal in history, but the history books often ignore the people who were already here. The cities of Minneapolis and Seattle approved similar resolutions last year. 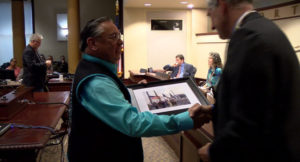