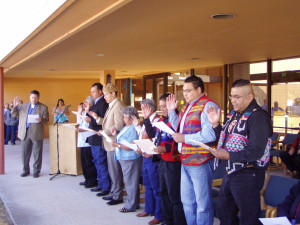 The Tribal Council this month adopted a set of priorities and goals to improve the tribal organization and service to the membership.

The priorities and goals are specific, and performance can be measured on a regular time basis. There are 14 priorities that Council focuses on with the plan:

Each of these priorities has its own series of goals, with an identified lead coordinator and support.

The purpose is to establish goals that are realistic and achievable, said Secretary-Treasurer Jake Suppah. Stating goals and priorities that are specific and realistic allows for measurable results, he said.

Tribal Councilman Kahseuss Jackson commented, “This is an landmark new approach to achieving Tribal Council priorities. We now have an implementation plan which will better ensure progress towards stated priorities.”

Proclamation 26 is a detailed document, and will be presented in a series of articles in the Spilyay and on KWSO. The progress for each priority will be reported to the community.

The first goal for the first priority is: “The Tribal Council shall annually develop, review, and approve a balanced Tribal budget for each fiscal year in order to promote and maintain the financial sustainability and integrity of the Tribe.”

The Secretary-Treasurer is the lead coordinator, working with Finance and the general managers. The success in reaching this goal will be clear each budget year, with regular progress reports during the year from Finance and the S-T.

The Twenty-Sixth Tribal Council has passed two balanced budgets, for 2014 and 2015, the first for the tribes in several years. The deficit spending of the previous years led to the serious budget cuts of 2014.

The second goal of the first priority is: “The Tribal Council will develop a plan to replenish and rebuild the Tribe’s revenue reserve, per capita, and senior reserve funds to sustainable levels over time.”

These funds had been depleted by the years of deficit spending before 2014.

The third goal of the budget priority: “The Tribal Council will develop and approve a plan to expand its grant writing capacity in order to maximize the leveraging of tribal funds and resources with federal, state, foundation and corporate grants.”

The fourth and final goal of the budget priority: “The Tribal Council will identify and develop near-term (1-5 years) and long-term (6-15 years) revenue projections from all available and potential resources in order to improve the Tribe’s financial planning, budgeting and reporting.”’

“If the tribe continues to use this process—setting achievable goals, establishing priorities, and measuring results—it will get better and better at it. Results will come quicker and the community will see the impact. In my opinion, this Council is already well on its way to rebuilding the Warm Springs Nation.”