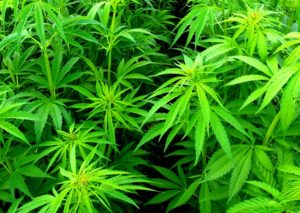 Starting on July 1, Oregon law enforcement will not prosecute a person who is over the age of 21 and in possession of up to an ounce of marijuana.

This raises a law enforcement issue on the reservation, where the tribal criminal code follows federal law. Marijuana remains a Schedule 1 Controlled Substance under federal law, and under the tribal code.

Starting in July, a person could be in legal possession of marijuana in the state, and then be in violation upon traveling onto the reservation, such as on Highway 26.

A non-tribal member with less than an ounce of marijuana could be cited for a civil violation on the reservation, and a tribal member could face a criminal charge.

The U.S. Attorney would make the decision whether to prosecute the person, said Stan Suenaga, general manager of Warm Springs Public Safety.

Tribal Council meanwhile has appointed a team to look at the implications of the state marijuana legalization law. Any economic potential of the new state law is a main task of the team.

The law enforcement aspect of the new law is a policy decision for the membership and Tribal Council, said Pi-Ta Pitt, member of the team appointed by Council.

The director of the U.S. Department of Justice last year provided a guideline for federal prosecutors in states that have legalized marijuana.

With these requests in mind, the director of the U.S. Department of Justice provided some guidance to all U.S. Attorneys, their staff and tribal liaisons. “Indian Country includes numerous reservations and tribal lands with diverse sovereign governments, many of which traverse state borders and federal districts,” the memo reads.

“Given this, the U.S. Attorneys recognize that effective federal law enforcement in Indian Country, including marijuana enforcement, requires consultation with the tribal partners in the districts, and flexibility to confront the particular, yet sometimes divergent, public safety issues that can exist on any single reservation.”

The U.S. Attorneys, then, should work with each of the tribes in determining how to proceed with the handling of marijuana cases.

The Department of Justice memo also refers to an earlier document, “the Cole Memorandum,” that provides guidance to U.S. Attorneys in handling off-reservation marijuana cases in states where it is legal.

The U.S. Attorney is to meet with the tribes and determine the tribal opinion on the matter. A tribe could choose to follow the Department of Justice guideline; or follow the state law; or continue strict prosecution.

Last fall, Oregon Measure 91, legalizing marijuana for people over 21, passed by a margin of 56 percent to 44. In the Warm Springs precinct the vote was 158 in favor and 133 against.