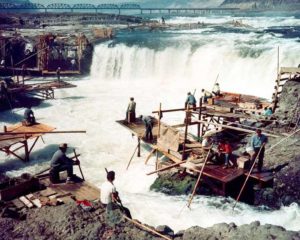 This year, the Confederated Tribes of Warm Springs commemorates 160 year’s since the signing of the 1855 Treaty with the Tribes of Middle Oregon. As people who have always been sovereign nations, our treaty did not “give” us rights, it reserved the rights that we already had and had been exercising since the beginning of time. This included the right to hunt, fish and gather at “usual and accustomed” places. The Treaty also established a formal nation-to-nation relationship with the Federal government, a relationship that continues today.

But before the Treaty existed, the Wasco and Warm Springs peoples governed themselves and maintained diplomatic and trade relations with many Nations. We had distinct cultures and languages and lived along the Columbia River – one of the richest fishing and trade areas of the region. The river provided several species of salmon, lamprey and sturgeon, trade brought buffalo meat and hides, pipestone, obsidian, dentalia, and slaves. The trade network was said to reach as far north as Alaska and all the way to California.

Lewis and Clark, in their journals, estimated that there was between 7,200 and 10,400 Indian people living between Cascade Rapids and The Dalles between the years of 1805-1806. Increasing encroachment of white settlements along the Columbia River would eventually result in the removal of the Wasco and Warm Springs from the banks of the Columbia River.

In June of 1855, roughly 500 Wasco and Sahaptin speaking Indians gathered at The Dalles to negotiate the terms of the Treaty. During this time, there were not many English-speaking Indians so everything had to be translated into Kiksht and Sahaptin. Our language teachers often tell us, there are some words that do not translate into English so these negotiations must have been very difficult.

Over the course of the 3-day meeting, our leaders agreed to give up 10 million acres of land and reserved land between Mt. Jefferson and the Deschutes River for the exclusive use of the Wasco and Warm Springs Indians. The federal government agreed to build erect a sawmill, flouring mill, hospital buildings, school house, and to provide services for a term of fifteen years of a farmer, blacksmith, wagon and plough maker, physician, sawyer, miller, superintendent of farming, and a school teacher.

The Treaty outlines other areas including how the federal government would provide payment to the Tribes for the promotion and well being of the community, building structures, and erecting homes for head chiefs. In Article 5 of the Treaty, it discusses allotment of reservation land and in Article 7 it states that the Tribes will “promise to be friendly with all citizens…” and that we will “not make war on any other tribe of Indians”.

On June 25, 1855, one hundred and fifty Indian leaders signed the Treaty and within a few years, the Wasco and Warm Springs people relocated to Central Oregon. The Wascos settled primarily in the Agency area and the Warm Springs in the Simnasho area. Leaving the Columbia River, a place where deep cultural and spiritual ties, was a difficult decision for our leaders. But they also exhibited great foresight by ensuring that our people would be able to continue living and practicing our cultural ways and reserving our rights to hunt, fish, and gather in usual and accustomed places.

Today, there are many Tribal members who fish for smelt along the Sandy River, harvest eels at Willamette Falls, fish along the Columbia River, and hunt and gather roots and berries in various places throughout the state. We have the ability to continue our practices because of the negotiations that were done on our behalf 160 years ago.

Today’s battles for Indian rights are in the courtrooms and in the realm of public opinion. It is with that in mind, that each of us should have a basic working knowledge of the Treaty and for those who want to advocate for our rights within local, state, federal or international forums, a deep understanding of our Nation’s founding documents and understanding of familial ties to the Treaty is necessary. Our Treaty lives within each of us and we have a collective responsibility to honor the work our ancestors by contributing to the positive well being of this community and working to protect what we have.

Our Treaty mattered then, it matters now and it matters for our future.