The P-515 Fire on the Warm Springs Reservation Fire continues to burn in areas of timber with grass, shrub and patchy conifer.  The fire began late Sunday afternoon (8/16/20) as a result of lightning.

In spite of strong winds yesterday, the P-515 fire was held within the current footprint.  Retardant and helicopter bucket work assisted firefighters in keeping the P-515 Fire from advancing further to the east.  An Oregon State Fire Marshal’s Task Force remained focused on protecting threatened residences along County Line Road which is still at a Level 1 Evacuation (Get Ready) Notice.

Crews will continue to build and improve containment lines on the south, west and north flanks looking to tie the northeast and east flanks of the fire.

The Lionshead Fire is 836 acres and 0% contained.

Dry conditions are expected through the weekend with generally light winds.  The change in winds could influence fire direction and spread.  The fires may see high rates of spread on steep wind facing slopes.  Due to abundant dry fuels, difficult terrain, and breezy winds, the Lionshead Fire may see active fire behavior with spotting today.

County Line road is closed to traffic where the pavement ends.  Other roads closed for safety reasongs are the B140 at Potter’s Pond, the B210 road and the P-500 road.

Both the P-515 and Lionshead Fires are being managed by Northwest Incident Management Team 7.  There are 494 personnel working to suppress both fires.

You can read this morning’s full update HERE 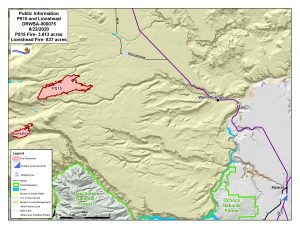