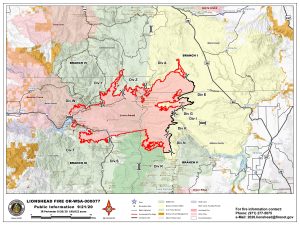 You can view a PDF version of this fire map HERE

Good progress was made Sunday on the northeastern portion of the fire. Crews worked directly on the fire’s edge towards Badger Butte, reassessing containment options and conducting a small burnout operation along an existing road system. Crews were able to build sections of line and plan for filling in gaps in the line moving forward.

The eastern fire edge is secure, but crews will continue to mop up and patrol for hotspots.

On the southeast perimeter, working west from north of Jefferson Lake, the fireline has been secured west to an area of rugged lava rock. Fire managers are monitoring this area with aircraft.

The edge of the south side of the Lionshead Fire hasn’t shifted.  A combination of hand and dozer line is being constructed using a historic burn scar as an anchor point and tying into Highway 22.  Line construction continues west as terrain allows.

The areas of Idanha and New Idanha and private lands to the south of the fire are looking good. In many places the fire has checked itself as it burns up against road systems. Structure protection efforts continue. Utility companies are starting to repair infrastructure in the Detroit area. One focus today will be continued work on a large spot fire in that area.

On the northwest flank of the fire suppression plans are being developed.   Spot fires are being focused on and indirect contingency lines are being established in the event that fire activity increases, and firefighters are not able to engage the fire directly.

You can read the full fire update HERE

Roads and trails near the fire remain closed for public safety. This includes roads and trails on the Confederated Tribes of Warm Spring lands adjacent to the fire and a 40-mile section of the Pacific Crest Trail between Santiam Pass and Olallie Lake. Forest closures are in place for: