Skip to content
Wind and Smoke are the headlines for tonight on the fire line.  There is limited visibility  and increased fire intensity.
The P-515 fire has burned 4609 acres.  Firefighters continue to mop up
The Lionshead fire has burned 20,600 acres.   It has crossed the crest north of Mount Jefferson and is proceding along the north ridge of the Britenbush River and has reached Bear Point.  There is a recommendation for a Level 3 Evacuation notice for the Marion County area.
The fire made its initial run late this afternoon as the winds increased.  The fire made a 4 mile run in just 2 hours.  The spot fire that occured on Saturday burned back toward the east back into the main fire.
Pacific Northwest Team 3, a Type 1 team, has joined Team 10 to assist with the increased complexity of these fires and will assume command at 6am on Tuesday, 9/8/20.
—
Warm Springs is experiencing a lot of smoke cover right now. The majority of the smoke is actually from major fires burning in North Central Washington.
The smoke has been carried by the strong cold front approaching which is pushing wind from the north east to the south west. Winds today are predicted to be sustained around 20 mph and gusting up to 40 mph by this evening. There will be gusty & smoky conditions in Warm Springs and surrounding areas until roughly Tuesday evening, September 8th. On Wednesday, September 9th prevailing winds start to return from the West. 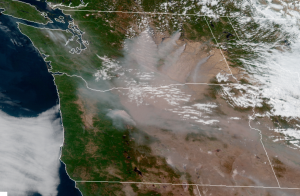 Frontier 911 issued a message about the Red Flag Warning currently in effect around 6pm today.  NO OPEN FLAMES are allowed at this time.  That includes Propane Campfires or BBQ’s.

The National Weather Service in Pendleton has issued a Red Flag Warning through Tuesday (9/8/20) 11pm for very dry and windy conditions.

Critical fire weather conditions are occuring as a cold front moves into the area and advances southwest while overlapping with low humidity.

Any ongoing fires or new fires that develop will likely spread rapidly.