A Virtual Community Meeting will be hosted on the “Lionshead Fire Information” Facebook Page today at 7:30 p.m. – We would like to encourage the public to email questions to 2020.lionshead@firenet.gov. You do not need to have a Facebook account to view the live meeting at https://www.facebook.com/LionsheadFire/. The audio from the meeting will be broadcast live at 7:30 on KWSO 91.9 FM. 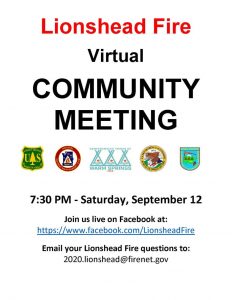 The P-515 fire has burned 4,609 acres and is being utilized as an anchor point to battle the Lionshead fire which has burned approximately 136,346 acres. Crews working the eastern side of the Lionshead Fire located on the Warm Springs Reservation, continued to make great progress widening containment lines with strategic firing operations yesterday.

Hand-crews, dozers and aerial support continue to secure line around secure new lines around the B-210 road leading to Trout Lake and P-500 road in between the P-515 and Lionshead fires. Containment lines around Olallie lake and to the east on to the Warm Springs Reservation will continue to be prepared today for planned strategic firing to harden the fire line. The fires footprint did not grow to the east as they enhanced and mopped up existing areas of containment. They performed firing operations to widen and secure fire breaks of the south eastern flanks around the J-100 road series to tie the fires edge into old lava beds to the south west of Mt Jefferson. Strategies are being discussed on containment options to be used to go west over the crest of the cascades. Strategies are shifting slowly from evacuations, road closures and structure protection to fire containment.

Today, firefighters will continue hardening containment, keeping close watch on the fire as the winds return to the westerly flow. Handline and dozer line will continue to be put in where needed, laying hose lays and mopping up areas along control lines that have heat. Crews will watch for any spot fires that may come from the change in winds or fire growth outside the fire area. Air resources are available to help the firefighters on the ground but will be dependent on visibility due to smoke. Pockets of unburned fuels within the fire have potential to torch and put up large columns of smoke.

You can see the full Fire Report HERE

There are currently no orders for evacuation on the reservation. The Oregon Office of Emergency Management has created an interactive database to help provide the most up to date information on evacuation statewide. https://www.oregon.gov/oem/emops/Pages/RAPTOR.aspx

Road Closures on the Warm Springs Reservation that remain in place are: Trout Lake Road at pavement end; Road B140 at Potter’s Pond; Road B210 and Road P-500. All trails south of Trout Lake, west of M-120 Metolius Bench, east of Mt. Jefferson, and north of J-195 will be closed to the public. Tenino Road (P-200) is closed to the public, with only fire personnel and residents are allowed. For public and firefighter safety, roads and trails on the southwest portion of the Warm Springs Reservation near the fires are closed to the public. Forest closures are in place for Deschutes, Mt. Hood and Willamette National Forests.